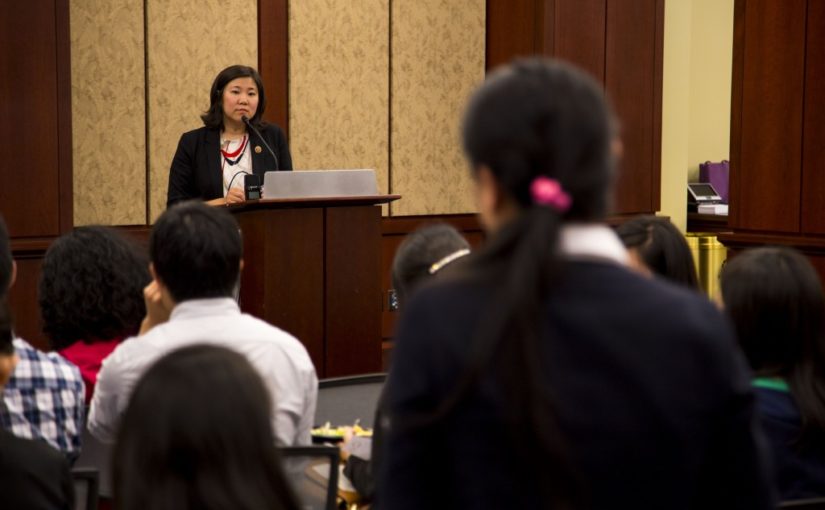 The Washington Leadership Program 2013 kicked off its first event on June 12 at the U.S. Capitol Building Visitor’s Center. Nearly 200 young professionals and interns gathered to hear opening remarks from CAPAL Board Members Katrina Dizon and Rebecca Lee (Chair), as well as some of the WLP sponsors such as the National Education Association, Suntrust, and Comcast. Following these remarks, Congresswoman Grace Meng gave a knowledgeable and inspirational speech.

Speaking from her own experience as a daughter of immigrants, Congresswoman Meng stressed the importance of Asian Pacific American (APA) representation and the responsibility of Asian Pacific Americans to continue to create opportunities and support incoming APA leaders, referring to Michelle Obama’s quote, “When you’ve worked hard, and done well, and walked through that doorway of opportunity…you do not slam it shut behind you…you reach back, and you give other folks the same chances that helped you succeed.”

She emphasized the power of APA narratives and encouraged the interns and professionals in the room to make themselves felt and heard, especially in the face of racial adversity.

Ms. Cohen’s networking workshop proved extremely beneficial, even to the most seasoned DC-networkers. Her workshop covered everything from handshake etiquette to nonverbal body language to small talk snippets to following up. She answered basic questions of “How firm should my handshake be?” and “How soon should I follow up after meeting someone at a networking event?” She even spoke to email follow-up etiquette, noting that following up the same day is more than acceptable; it is encouraged.

Overall, the Opening Ceremony was a hit! Those who attended can attest to the relevance of the Opening Ceremony: the charisma of the speakers, the wise advice for succeeding in the professional world, and the fun workshop that provided us with relevant tips for networking!

For those who did not attend, we invite you to join us on Wednesday, June 19th for our second WLP Session focusing on Comprehensive Immigration Reform and the AAPI Community! RSVP for this session and all other sessions of WLP here.