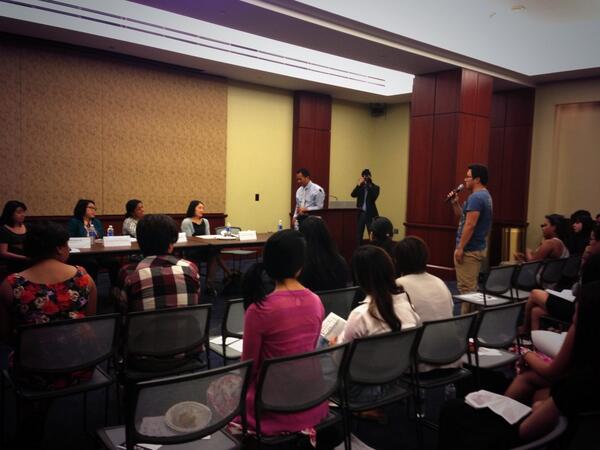 This past Wednesday, June 19th 2013, the Washington Leadership Program held its second session focusing on Comprehensive Immigration Reform and Asian American and Pacific Islanders at the U.S. Capitol Building. The evening started out with light socializing and some delicious Potbelly sandwiches!

Pramila Jayapal – a Distinguished Fellow of the Center for Community Change, founder of OneAmerica, and Co-Chair of the We Belong Together campaign on immigration reform.

This amazing panel of women shared stories of their paths to immigration advocacy and activism. Wong began by sharing some qualitative data highlighting the importance of immigration for Asian Pacific Americans.

The speakers also gave background on how they became interested in immigration. Bui, for example, explained that after trying several majors as an undergraduate, she fell in love with a picture in a textbook of two refugees in a boat. This helped her understand the importance of representing and advocating for her immigration story.

Lai’s story was similar to Bui’s story, trying several majors before finding her way into law. Eventually, she began working with low income Asian Americans, many of whom were not proficient in English.

Jayapal started working post 9/11 to fight against Arab stereotypes and hate crimes. During this work, she realized that she also needed to challenge the government and policy makers. Her work for Arab justice turned into a need for broader immigration reform rights.

The panelists highlighted the importance of story telling, a theme that was also brought up in the question and answer session. They explained the importance of finding your own connection to immigration. Bui encouraged young interns and professionals to think about what personal story of immigration they hold, “What is your personal story of immigration? Or if not that, then of your family and how they moved from place to place.”

The panelists also spoke about the importance of storytelling in mobilization and about how stories can be told differently in different spaces to serve different purposes. As Dizon summarized, since narrative sharing is a key tool of activism, activists and organizations need to think about how to protect the humanity of others and treat stories ethically.

The panelists encouraged young leaders to step up and take on APA issues. The speakers asserted the need for Asian Pacific Americans to take on issues of immigration. As Lai said, “immigration is an issue of equity…immigration is an Asian American issue.”

Echoing the sentiments of the panel, Ainne Athar, a young Dreamer, shared her experience of the reality of Dreamers, immigrants and undocumented immigrants in the United States. She recounted the fear and inequality she and her family faced, calling the WLP attendees to action. She reminded the interns and young professionals in the room of our responsibility to address immigration inequity for the betterment of our APA communities and the United States at large.

As Jayapal wisely noted, “change doesn’t come easily,” however, Ainne’s story and countless others remind us that we are also powerful and can be agents of change. As Bui firmly stated, “We need to impact legislature as laws have impacted our lives.”