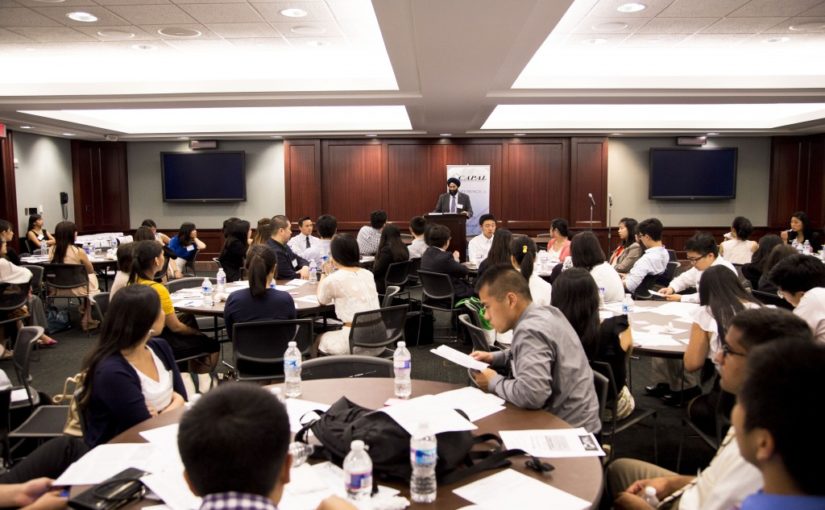 Jasjit Singh, Executive Director of the Sikh American Legal Defense and Education Fund (SALDEF), began the session by speaking about the hate crimes targeting Sikh Americans. Following 9/11, there were upwards of 700 hate crimes targeting Sikh Americans, according to the FBI, an increase of around 1600%. Singh drew a parallel, noting that in the two attacks on U.S. soil, Pearl Harbor and 9/11, both events resulted in a huge wide-scale targeting of one group with violent backlash and the crimes. Singh emphasized that hate crimes are caused by and perpetuate the “other”-izing of social groups. He also spoke about the power of the media and politicians to otherize and elevate particular groups to serve their own needs.

Following Singh, Jessica Li, Board Member of CAPAL and Interim Executive Director for the Asian/ Pacific Islander (A/PI) Domestic Violence Resource Project (DVRP), spoke about domestic violence, which encompasses dating violence, family violence, children, elder and in-law abuse. Li explained the relevance of issues of violence, as 1 in 5 women will face attempted or completed rape in their life, while 1 in 4 will face domestic violence.

In order to understand how violence affects our communities and to brainstorm action steps towards eliminating violence within our communities, WLP attendees engaged in an interactive scenario:

The scenario recounted a common and realistic story of Liz and Dan, two friends who attended an unofficial party hosted by an Asian American student organization. After drinking and flirting, the two end up in Dan’s room where Liz is pressured to have sex with Dan. Liz rejects his persistent advances. She loses her patience and wants to go home but is held back when Dan grabs her and emotionally bullies her into staying over night. Feeling threatened and uncomfortable, she stays. During the night Dan continues to stay close to Liz and to touch her inappropriately against her wishes. The next day Liz tells her friends about what happened. They feel bad but are unsure of how to help. A couple of them tell her that she is completely overreacting and that it is not a big deal. They don’t believe that their friend Dan would do that. Lastly, Liz tries to report the incident to a campus safety officer, who tells her that she cannot report the incident because she had consented to staying the night with Dan.

In small groups, WLP attendees took on the roles of various stakeholders, such as Liz, Liz’s sympathetic friends, Dan, Dan’s friends, and the campus safety officer. Each small group discussed both what the stakeholder would ideally do and also what realistic steps the stakeholder could take in order to address the scenario.

Groups then presented their small group discussions to the other WLP attendees. All of the WLP scenario workshop groups brought up great discussion and recommendations for actions. Though unable to recreate the creativity, power and depth of these conversations, below, we have included some key points brought up by several of our WLP scenario groups:

• A survivor, such as Liz, might not speak out because of the fear of social stigmas, since we live in a culture of victim-blaming
• It is not the victim or survivor’s responsibility to educate others; it is everyone’s responsibility
• Realistically friends of Dan or other friends of perpetrators of violence would blame the survivor/ victim – that is something we need to fix
• In an ideal situation, Dan or a perpetrator of violence would recognize what happened, apologize, and begin to advocate against sexual and other forms of violence
• Sympathetic friends of survivors should be aware of the survivor’s needs and desires. They should give the survivor agency by letting them decide when and if they want their story shared
• Friends who are confused or unaware should take steps to educate themselves in order to be better allies and advocates
• Survivors often need time to heal. Their physical, mental and emotional safety is the priority. Ideally, after a period of healing the survivor may feel that he/she/ze would like to work towards creating greater awareness of violence
• Friends should believe the survivor
• Friends of the perpetrator of violence, in this case Dan’s friends, should hold themselves accountable to one another – Dan’s friends should hold Dan accountable to his actions and should talk to him about the realities of violence regardless of whether Dan will face institutional or social repercussions for his actions

Following the role play, Li reminded attendees of the realities of sexual violence and the need to understand what consent really means. She explained that in the moment, many survivors have one of three responses: fight, flight or freeze; but is being frozen the same as consenting? Violence is not only physical or verbal. It can also be emotional and psychological causing real harm that is sometimes misunderstood or overlooked. Furthermore, Li gave some tips to attendees on how to support survivors, first to listen and believe the survivor, understanding that over time and sometimes with more healing, more information or the sequence of events can be recalled differently.

Indira Edwards, Board Member of Asian/ Pacific Islander Domestic Violence Resource Project (DVRP), closed the session with a powerful speech on domestic violence statistics and her personal experiences. She asserted the importance of addressing violence as it affects the Asian Pacific American culture and community, and the world at large. As Edwards stressed, the issue of violence is “not a girl or woman’s issue, it is a human rights issue.”