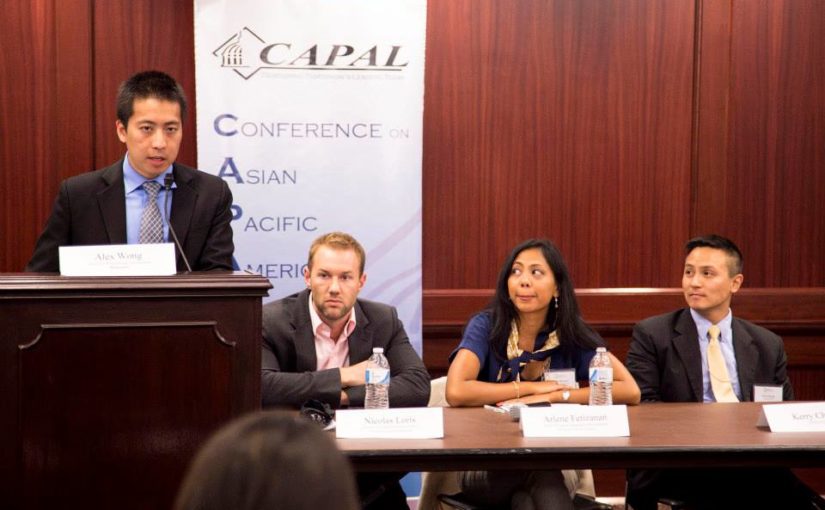 Alex Wong, CAPAL Board Member and Budget Analyst for the American Wind Energy Association (AWEA), moderated this session. The session was comprised of a panel of three speakers: Nick Loris, Herbert and Joyce Morgan Fellow of The Heritage Foundation, Arlene Fetizanan, Senior Program Manager, International of Alliance to Save Energy, and Kerry Cheung, an Energy Fellow with experience working for different agencies on the Hill.

Our moderator began by discussing the Keystone Pipeline, which, if constructed, would bring oil sands from Canada to Texas. Dr. Cheung began by explaining that though the pipeline is considered environmentally sound except for the potential of leaks and carbon emissions, one of the main concerns is that the pipeline will cross environmentally and culturally sensitive places. Mr. Loris noted that the Heritage Foundation supports the pipeline because of tax revenue and potential job creation. He argued that as the pipeline has been tested and declared safe by reputable sources, the more pressing issue with the pipeline would be the 17% increase in carbon emmissions, a very small amount when compared on a global scale. Speakers also noted the importance of preventing oil spills and altering liability policies to ensure that oil spills are cleaned up and paid for.

Speakers also discussed climate change and whether it was man made and whether it can be mitigated. Ms. Fetizanan argues that climate change can be mitigated by individuals and the government both domestically and internationally. As an example, she referenced the many countries that are exploring environmentally friendly architecture. Ms. Fetizanan also advocated for reducing energy use on the individual level, considering alternative sources of energy, such as solar wind, but ultimately thinking critically about how to minimize the use of excess energy. Mr. Loris explained the need to look at U.S. climate legislature and argued that current legislation was pricey and insufficient.

All three speakers underscored the importance of messaging and education in order to convince people, including older generations, to become more environmentally aware and friendly. Dr. Cheung noted that in some AAPI communities, people already practice sustainable living. For example, his own parents choose to turn off the lights and save plastic containers to save money. The speakers stressed the power of youth to close the information gap. Ms. Fetizanan provided suggested framing environmental issues specific to many of our backgrounds and communities, explaining that in working class immigrant families, it can help to use an economic and social justice perspective to illustrate how being environmentally friendly is better for health and financial well being.

For those who did not attend, we invite you to join us on Wednesday, June 24th for our last WLP Session open to the public focusing on career reflections! RSVP for this session and all other sessions of WLP here.