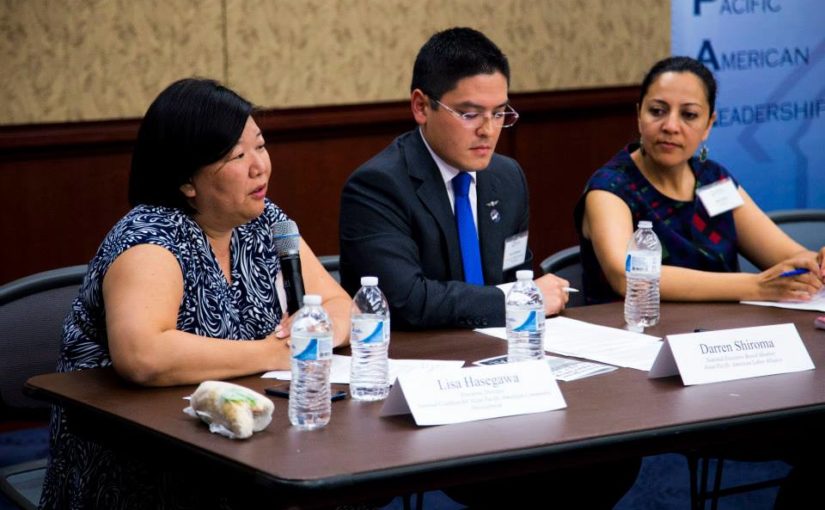 The session was moderated by Hung Nguyen, an Advisory Board Member for CAPAL as well as the Vice President of Marketing, Proposal Manager and Project Manager at Knowledge Advantage Inc.

Nguyen set the tone of the session by promoting a personal and interactive relationship between the WLP attendees and panelists. Panelists began by speaking about the need for APA representation in D.C. and nationwide.

Shiroma spoke about his experience coming from Hawaii to California and then D.C., highlighting the differences in APA numerical representation. Shiroma expressed the need for women to be leaders and told attendees, “try to forget that you are a minority and don’t let it stop you.” He underscored the importance of asking community members to step up into leadership roles. Hasegawa explained that APA discrimination is not always blatant or intentional, but that many people are ignorant of APA issues and thus, we need more Asian Pacific Americans in policy issues. Amir agreed stating that while great strides had been made, there is still a long road ahead for APA issues. Etcubañez spoke about needing women in higher positions. She emphasized the importance of community members supporting each other, speaking about paying it forward, working together, and keeping doors open for others. As she said, some people feel entitled to spaces and positions of power. While we do need to ask others to take n leadership, we also need to ask ourselves to step up and critically ask why we are hesitant, “do not be held back by: Am I worth it? Do I deserve it?”

Nguyen then asked panelists about how to engage and how to engage others. Hasegawa encouraged attendees and interns to get local level experience with local government, non-profit, etc., to get a local perspective prior to coming to D.C. By having this perspective before coming to D.C., people will be more grounded with a stronger perspective. Without a prior developed perspective, it is harder to be effective, especially in advocacy work. Etcubañez said, “If you don’t like what the law says, work to change it.” She also explained that practical actions were important, even if they seemed small. Personal stories also move people differently, so it is key to use stories to engage people. Amir explained how organizing can begin with talking to friends and peers. Hasegawa also encouraged attendees to bridge networks in home communities to connections and networks from D.C.

Panelists spoke on the model minority myth explaining the need for data disaggregation and education on the continuing issues of many APA communities, especially around education. Panelists then addressed the recent Trayvon Martin/ Zimmerman decision, specifically how the APA community can stand in solidarity with Black communities and other communities of color. Hasegawa also provided historical context showing the ways that APAs and Black communities have supported each other in the past. As she said, “we don’t have a choice,” solidarity is important not just for the sake of supporting one another, but also important for APAs and APA issues.

Panelists closed with some final advice for APA advocates and activists. Shiroma encouraged attendees to utilize social media and the internet, and to educate themselves when they find something interesting. Amir said, “Be engines of change, be leaders in your communities, make connections, get involved and share stories and issues.” Etcubañez reiterated the need for small actions, education your self on your community and other communities. Take incremental steps and pull in the people around you. Hasegawa’s advice was to get involved, commit to making connections, and pass on information.

This week, we will be celebrating our interns and scholars at the Washington Leadership Program Closing Ceremony at St Gregory’s Hotel!