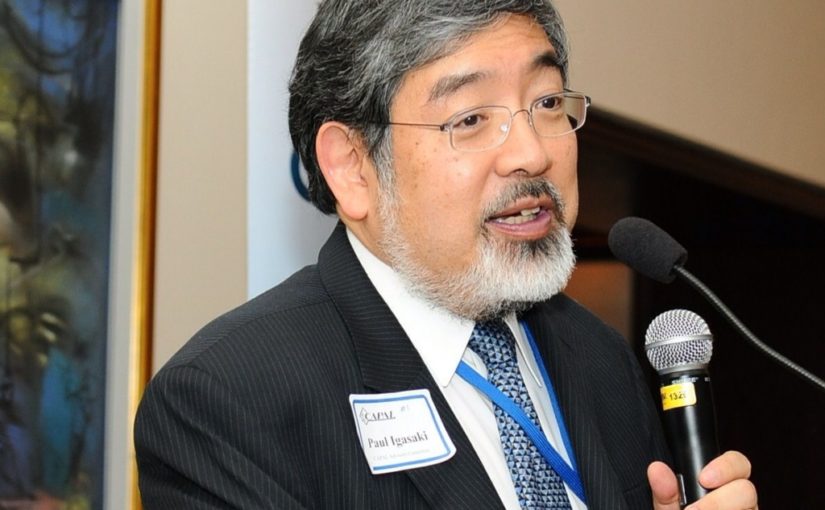 As a founding member of CAPAL, Paul Igasaki has seen CAPAL and the overall landscape of AAPI advocacy change into what it is today. Below, he shares his own experience with CAPAL and career advice for the younger generation interested in public service.

Q: What were your personal motivations for joining CAPAL?
A: When I first started [in Washington D.C.], CAPAL didn’t exist, but there were only two Asian American groups here at the time, including JACL where I was. A number of us working on Asian American issues saw a growing number of Asian Americans coming to town for internships mostly with congressional offices and executive agencies in government. We thought it was important  to reach the younger folks so they understood the history and the current needs of our community. CAPAL started as a series of programs during the summer to brief [interns] on these issues so they could get to know Asian Americans  within the national government and various organizations in town and how government affects our communities. We saw a greater interest both among the interns and the panelists- which included Asian American Members of Congress and Asian Americans who worked for different organizations- anywhere from women’s groups to labor unions, the press and government agencies.  We were able to form a growing community of people who were dedicating themselves to providing briefings and information to young people coming to Washington.  The goal was more than just education, it was the empowerment of a community that was seriously underrepresented in our government.

Q: Looking back at the past 25 years of CAPAL, has the organization met or exceeded any of your expectations?
A: Initially, we weren’t certain how permanent the idea would be. Given the growth and the capability of the community and the number of people to help with the issues, it’s not so surprising, but in the context of the late 1980s, it’s quite a bit. I am very proud to have been involved with it. Initially, I was involved with organizing the program, serving on the board, and later on I served on panels and provided information. I’ve had the opportunity to contribute at a number of different levels. All in all, I’d say CAPAL has been extremely effective, but there’s still more work to do.

Q: What kind of impact has CAPAL had on the community and your own personal experience as an APA?
A: When I was in college in the Midwest, I felt isolated and sought more information about our changing communities by going to be closer to active communities on the West Coast.  It opened my mind and changed the course of my life, seeing an organized and increasingly empowered community.  CAPAL, I think, has had a similar effect on many who came to DC.  What’s most significant to me is that there are people who were somewhat interested in their identity and family history, and after working here in D.C. and participating in CAPAL, dedicated themselves to seek justice or provide services that our community needs. That’s the greatest success and ultimate goal of the organization, building upon each new generation.

Q: Can you speak about the importance of APAs in public service?
A: You need to have people who are aware of the commonalities between one’s personal history, family, community history, and other people and communities. Even given the massive increase of Asian Americans in our society, we are still a very small minority in the scheme of things. Things like language access, marriage equality and disability rights weren’t necessarily of importance in our community at one point, but now they are at the heart of what Asian Americans believe to be their obligation to our society. That’s been a wonderful thing to see.

Q: What are three pieces of advice you have for someone interested in public service and wants to pursue a career in public service?
A:  Whether you plan on working in the corporate sector, the medical field, or maybe even the legal field, you should at least spend a little bit of your time exposing yourself both to civic governmental and charitable participation.  At the very least, we should all be informed voters.  No matter what you do, we can all be activists of some kind.

To everyone who thinks this is what they want to do as a career, think broadly. Civic participation could mean working for the federal, state, or local government. This could mean working at Social Security helping people process their claims, becoming a member of Congress, or even the President of the United States. In terms of nonprofit work, working for an association of retired people, women’s rights groups, people with disabilities, and LGBT people are all among the options.  Or, of course, working on behalf of the rights of Asian Americans and Pacific Islanders would be especially fulfilling and important.

I also urge people to be flexible with their careers. You have to understand what your goals and values and the experiences you aspire to achieve.  Understand that reaching your goal is rarely a straight line. Most of my jobs were not exactly what I wanted to do, but each gave me new opportunities. As Asian Americans, we do well caring for our families, but you may need to make compromises. For example, you might want to work in legal aid as a young lawyer, but if that job can’t give you money to support your parents, then you do something else but you can always volunteer in legal aid. There are a lot of ways we can contribute. It’s a balancing of what we think is important.

Paul Igasaki is Chief Judge & Chair of the Administrative Review Board of the U.S. Department of Labor. He was a founding board member and Advisory Board Chair of CAPAL. An attorney, he was a founder of the National Asian Pacific American Bar Association as well as for its Chicago Chapter. Previously, he served as acting Chair and Vice Chair of the U.S. Equal Employment Opportunity Commission, appointed by President Clinton; Executive Director of the Rights Working Group; Deputy CEO of Equal Justice Works; Executive Director of the Asian Law Caucus in San Francisco; as Asian American Liaison to Chicago Mayor Harold Washington and his successor; Director of the American Bar Association’s pro bono program, Washington Representative of the Japanese American Citizens League; U.S. Senate campaign staff for Congressman Bob Matsui; Community law fellow at Legal Services of Northern California and a variety of other positions. He has been active in Democratic politics and is a graduate of Northwestern University and King Hall, the UC Davis School of Law, with distinguished alumni awards from each.