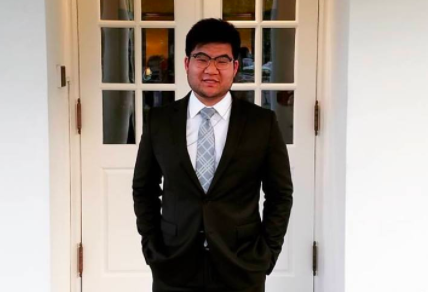 What drew you to public service?
Growing up with immigrant parents, I always had a deep appreciation for the opportunities this country has given our family. But at the same time, I grew up knowing the inherent disadvantages non-native speaking immigrant families had. I also grew up in Washington State where we had Asian American Governor Gary Locke. I saw first had the power and influence one could have in government even as an Asian American and I think that had a deep impression on me and my choice to pursue public service.
What issues are you most passionate about and how did you discover that passion?
Immigration is the first issue I became very passionate about by virtue of being an immigrant family. I then developed interest in small business because my dad was a dry cleaner turned entrepreneur who became very successful. In college, I focused on international relations and international trade. I always imagined myself working in a field that strengthened ties between the United States and the country of my heritage, South Korea. I’m happy to say that’s exactly what I’m doing right now in my own little way.

How did you hear about CAPAL? Why did you join the Board?
I knew about CAPAL since I was in college. I attended American University in Washington DC so attending CAPAL events throughout the school year wasn’t difficult. I knew when I had enough experience, I’d want to try and be on the board to pay it forward.
What was your CAPAL experience like as a board member? What did you accomplish?
The camaraderie and the level of passion I experienced and witnessed as a Board Member was truly unique. Although we were all young professionals, we were a group of young professionals with a common purpose. I certainly hope that I contributed to the board as much as I’ve learned from it.
As far as accomplishments, I was on the operations committee responsible for filtering through applicants for the summer programs. I was extremely proud of the class we put together for both years I was on the board. I think we focused a lot on the right values those years and it’s been very rewarding to see where those kid are now and how far they’ve come.

What is your favorite memory with CAPAL?
I think it was my second year as a board member when we did the inaugural pie a board member fundraiser. It was a unique idea and highly successful. I was a little surprised however, when someone was actually willing to pay $100 to pie me in the face.
How has CAPAL grown since you served?
I think CAPAL has made tremendous efforts to expand their programs to beyond just the DMV area. I remember when I was on the board, we actively tried to recruit students for our summer programs from all over the country. I think CAPAL has progressively worked towards those goals to greater success.

What are you up to now?
I was a political appointee in the Obama Administration. When the Administration ended, I left government and took the opportunity to start my own company. I now run a trading company that exports to Korea. It’s been a rewarding experience to work with the country of my heritage and directly contribute to US economic growth.
How did your time with CAPAL inform your career / personal life?
Being a CAPAL Board Member allowed me to not only give back to my community, but also expanded my personal exposure and network. Through CAPAL, I’ve been able to meet such a wide variety of Asian American young professionals that it’s helped me tremendously in my career and personal life. I imagine as the years pass and the CAPAL network grows, this will only become better.

Felicia Wong is a recent graduate from the College of William & Mary, where she double majored in Neuroscience and Asian American Studies and led the Filipino American Student Association and Global Medical Brigades chapters on campus. She was part of the CAPAL Scholars & Interns Class of 2016, and she hopes to continue the mission that inspired her to connect her interests in healthcare with the community she found in her cultural background and teachings. Felicia has been involved with a variety of media projects affording visibility to minority communities, her most recent project centering on a video for #AAPIs4BLM. Having lived in Germany for most of her childhood, Felicia makes regular trips back to visit her family, providing opportunities for her to indulge in her greatest joys: eating vanilla ice cream with hot raspberry sauce, taking fashion cues from strangers, cooking with her family. Non-country specific pleasures include: biking, music-browsing, RuPaul-fangirling. felicia.wong [at] capal [dot] org