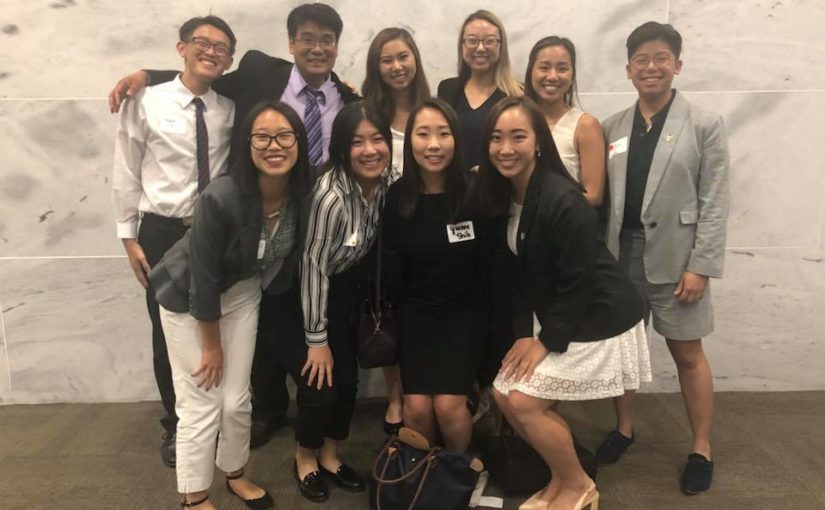 This week was filled with tough current events: continued separation of families at the border and the muslim ban being upheld. Nevertheless, this week our interns and scholars attended events to make the most out of their time in Washington D.C. However, these issues were a common theme between this week’s events.

This past Tuesday was the Annual APIAVote networking event. Here many congressmen and women gave their advice for young AANHPIs working in DC. Families being separated at the border was on the forefront of everyone’s minds and many speakers connected it to the Korematsu v United States case.

Although he and others discussed heavy topics, Representative Mark Takano gave some hope to attendees: “What separates our time from theirs…we have members standing up.” He continued to encourage attendees to do more by referring to Martin Luther King Jr’s famous quote with a spin: “The moral arc is long and it does bend towards justice, but it isn’t on autopilot….we must be the benders of the arc.”

With emotional topics in the air, Wednesday’s speakers shined more hope for the interns and scholars. At this week’s Washington Leadership Program: Grassroots advocacy, speaker Anj Chaudhry emphasized that as AANHPI members we are constantly ask to represent our communities and be social justice advocates, which can be tiring, so we must practice self care and remember that, “we can’t build a movement if you don’t experience joy.”

Other speakers including Hoan Dang and Grace Choi agreed with this statement. To add to this Hoan Dang recommended to empower others by facilitating, so those affected can better implement change. He recalled a time where Maryland policy was going to negatively impact those in the cosmetology profession, which is predominate in the Vietnamese community. Since he could not speak for them, not having their experiences he had to facilitate their advocacy, which was successful.

Finally, the week ended with more of a holistic social justice discussion. Sameer Kwatra, of the Nation Resource Defense Council, spoke about environmental justice but not from the perspective of an Indian-American, but as a human. All interns and scholars connected on a topic that affects everyone – climate change. Sameer explained his work and how he works closely with those who are most vulnerable to its effects.

After a long week of hard hitting conversations, Sameer brought back the conversation to a very important question to young adults – what work brings meaning. He told us, from his life experience, that when he was making good money at a bank, he wasn’t finding meaning doing a job that isn’t created for the purpose of helping. However, when he join NRDC, he found the meaning he was looking for.

Hopefully, we can all take the lessons we learned last week’s events and apply them to those inevitable bad events to make them a learning experience.

Posted by Simrnjit SeerhaSimrnjit Seerha currently attends American University in Washington, D.C., double majoring in Environmental Science and Political Science. She is currently apart of SALDEF’s SikhLEAD 2018 cohort. She excited to use the information she is gaining from both internship programs to her future leadership positions. Simrnjit was recently elected Sustainability Chair of her sorority. She hopes to show her sorority and others how easy it can be to make sustainable, environmentally conscious decisions. Besides the environment, Simrnjit’s passions include going on walks/runs, trying new recipes, and watching organizing tutorials on youtube.